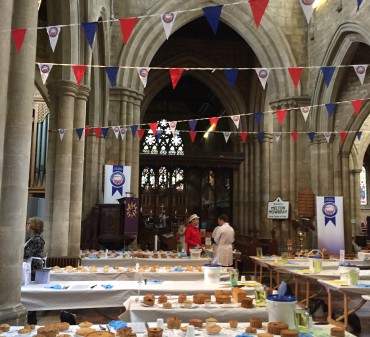 For the second year running, I had the pleasure of judging at The British Pie Awards 2016. Hundreds of pie-makers gathered for the competition on 9th March, held in the Rural Capital of Food – Melton Mowbray. This was the 8th annual pie awards, which has become an institution for pastry-connoisseurs across the country. This year, the awards was aligned to coincide with British Pie Week, so that we could all celebrate all things pie!

I was fortunate to be asked to judge the Pork Pie category – what an absolute dream given our Melton Mowbray location – the home of Pork Pie!!

After donning my apron and chatting to fellow judges, we were ready to start. Naturally, as we were in the atmospheric St Mary’s Church the pies were blessed which was sang along to the tune of American Pie!

After a stringent judging briefing, to ensure we all judged and scored appropriately, we set about judging the pies! Pork Pie was obviously a very popular category with over 70 entries – luckily there were a number of teams (so I only had to judge around 20!).

After a number of hours, we all finally agreed on the very best:

The judges travelled from far and wide and were a very high calibre that included industry experts, bakers and a wide array of journalists who write for trade magazines, national newspapers as well as freelancers and bloggers.

Next year, The British Pie Awards with take place on 8th March 2017.

As a foodie judge, I would like to advise producers who enter such awards to ensure that they check the products that they wish to enter. They must be of the very best quality and have great visual appeal. This may sound obvious, but I was surprised by the number of pies that received poor marks due to burnt pastry and boil out.