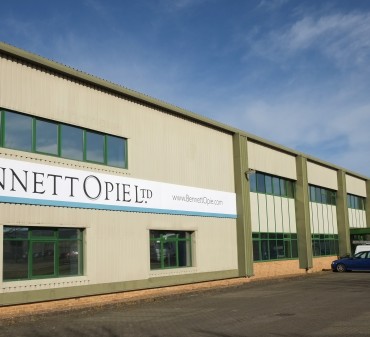 Bennett Opie, the fine food producer and distributor has announced plans to double sales from £25m to £50m over the next five years. To support these ambitious growth plans and to cope with growing demand the award-winning firm has just opened a new warehouse facility and enhanced resources with the appointment of several key personnel.

The new 4645m² warehouse facility, which is based around a mile from the manufacturing base at Sittingbourne in Kent, will be fundamental in the growth plans. The new facility has enabled warehousing and logistics capacity to more than double with over 6000 pallet spaces available at the new site.

Managing Director William Opie said “The new warehouse is a large investment for the company but it is fundamental to take us to the next stage of expansion. Business has doubled since 2008 so it’s imperative, given our track record, that we have everything in place to double our sales once again in the next five years.”

Already well-established in the UK grocery market, to realise growth, Bennett Opie is looking to develop existing channels and new markets. Having exported their Opies brand for over 30 years, the export market has been identified as an area with huge growth potential with the Far East, Middle East and the USA prime targets. New channels within the domestic market are also being pursued with online sales and food service key priorities.

William Opie added “Without detracting from our core UK business, effort will be placed on developing key export markets. In many countries, there’s a huge fan base for all things British, which, along with a growing expat community that enjoy tasty reminders of home, are key drivers for growing export sales. Our range has proved popular as it is the epitome of English foods with cocktail accompaniments like gherkins, cherries and onions, traditional pickles such as our signature Pickled Walnuts and also condiments, chutneys and compotes. We have already seen significant growth in the Far East and China in particular is a target market. There has also been a surge of interest from the Middle East after we exhibited in Dubai last year. We are not going to rest on our laurels and will still be investing and working hard to develop the UK market, but, it’s fair to say that we need a greater standing within food service and to have more prominence online.”

To support growth plans Bennett Opie has enhanced resources and made several key appointments across all areas of the business. In recent months Ian Geddes has joined as Logistics Manager, Jemima Vickers as Quality Assurance Manager, Rachael Hoad as Finance Manager, Andrea Constable as Marketing Co-ordinator, Beverley Brice as Sales Administrator and Graham Cook as IT Technician.