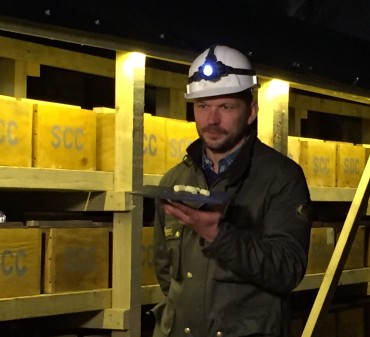 In early May 2016, food PR client South Caernarfon Creameries welcomed Channel 4′s Food Unwrapped programme who wanted to learn more about their special Cavern Aged Cheddar. Researchers had picked up on an article in the Daily Telegraph about the cheese, and realised that it would be of great interest to Food Unwrapped viewers!

They wanted to see whether the taste and texture of cheese was different having spent several months underground … so we spent a day with the film crew and presented Jimmy Dougherty to prove just that!

South Caernarfon Creameries were inspired to develop this signature cheese and make something truly delicious and different. Provenance is at the forefront of product development for the farmer co-operative, so this product ticked all the boxes as it is an authentic Welsh Cheddar, made from Welsh milk. A bespoke recipe was created for the cheese which is left to mature for a minimum of eleven months. It is then transported from the Creameries’ Chwilog base to the Slate Cavern in Blaenau Ffestiniog where it is left to mature 500 feet underground. This traditional ageing process takes place in original mining caverns and the product has proved so popular that cheese cave number 3 opened earlier this year.

Throughout filming Jimmy was convinced that the underground maturation process had added a unique characteristic to the taste and texture of the cheese with a firmer body and depth of flavour – especially as we tasted a comparable cheese made from the same batch that hadn’t been matured in the slate mine.

Apologies for the images … we were 500 feet underground!