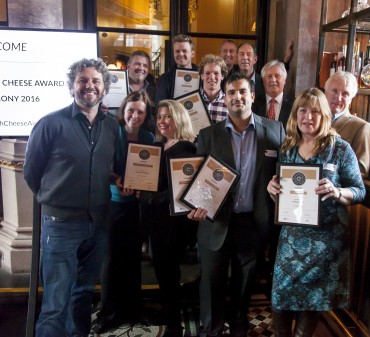 Splat PR has been the media contact for The Great British Cheese Awards as their food client, Peter’s Yard was lead sponsor of the event.  We secured a range of media coverage for the event in various trade and consumer titles including a piece in the Guardian.

Voted for by the general public, these new awards emphasise the diversity and talent that lies within the artisan British cheese industry and have highlighted that established artisan brands are inspiring new up-and-coming cheesemakers who are both producing equally fantastic quality cheese. The category winners of this inaugural competition were announced at a ceremony held on 25th October at The Gilbert Scott, an elegant British restaurant and bar by Marcus Wareing’s team which is set within The St Pancras Renaissance Hotel in London.

Famous cheesemakers since 1978 with the philosophy that Happy Cows = good quality milk = Good Cheese. A popular cheese available from Neal’s Yard, Waitrose, Booths, Paxton & Whitfield, Courtyard Dairy and many others.  Graham Kirkham said “I feel like these awards are really honest. There was a good gathering of fantastic cheesemakers and the judges were really good. The public voted as well and it was really nice to get them involved. The whole thing just has a really good feel to it and I’m so chuffed and happy to be a part of it. It’s nice to get recognition. When you win an award you realise it’s all worth it, because it is hard work and you can get bogged down just staring at the four walls of your dairy all day. To win just feels really fantastic.” Runner-Up: The Ludlow Food Centre

Originally in search of a new revenue stream for their farm, Philip and Carol Stansfield decided to diversify into cheese-making and noted that there was a gap in the market for a British made milder blue cheese and have been making Cornish Blue on their farm on Bodmin Moor since 2001.

Philip Stansfield of the Cornish Cheese Co said ‘It’s brilliant to win because the competition was like no other competition we’ve entered before. The format of it was superb and the fact that the public could get involved and learn all about cheese on the way was great. Events like this raise the profile of every cheesemaker involved. Winning awards is a big thing in our industry as it gives us lots of publicity and allows us to spread the word and get it in front of new customers.” Runner-Up: Sharpham Brie

Two Hoots Cheese is a small family business established by husband and wife Sandy and Andy Rose. They have been making cheese on their farm on the Hampshire / Berkshire border since 2003. The Barkham Blue, which has a distinctive appearance is made in the traditional way using pasteurised milk. Runner-Up: Stichelton

Chris and Clare Moody have been making goat’s cheese for over twenty years at their dairy in the small village of Landford on the edge of the New Forest. They started cheese-making when they owned a small herd of goats, but as the cheese making grew, they sold the goats to a local farmer who now supplies the milk while they make the cheese. Runner-Up: Perroche

Cornish Gouda is made by a Dutch family who moved to Cornwall in 1998. Due to poor milk prices, they diversified into the production of cheese using the milk produced by the herd. Giel Spierings said “One of our customers entered us into the awards, which was a pleasant surprise. It is fantastic to win the category because all the other finalists are such incredible businesses that I think very highly of, so to be on the same level of them is a great privilege. It feels great to be rewarded for all the hard work. Four and a half years ago I came home from college to see a ‘For Sale’ sign on the farm gate and decided I was going to start making cheese to try and keep the farm going. My mum and dad bought the farm with a big mortgage and the industry just collapsed so there was no money and they were going to sell up, but I decided that I wanted to carry on farming. I started buying milk off them at a fair price and turning it into cheese, read lots of books and carried on learning until I made this award-winning one.’ Runner-Up: Lincolnshire Poacher

Country Cheese started 27 years ago with a table in Tavistock’s Pannier Market and today has three shops in Tavistock, Topsham and Totnes selling in the region of one hundred different British cheeses. Gary Jungheim said: ‘We are immensely proud to win this award as it is judged by people who use cheese as part of their passion. For twenty-seven years we have striven to engage everyone with the miracle that is ‘real cheese’. This has grown into a delicious marriage between artisan cheese, cheesemakers, us and our customers. This award is a brilliant endorsement of this passion, rewarding our staff and a tangible recognition of their expertise. We want to continue influencing new customers with a lifestyle that rewards quality in every area – land management, animal husbandry, artisanal production, sympathy for the environment and respect for each and every facet of what goes into artisan cheese. Winning this award adds significant weight to this.” Runner-Up: The Cheese Shed

Made in the north Leeds suburb of Adel by Mario Olianas, who’s created a 30 day aged pecorino using his family’s traditional Sardinian recipe. Mario Olianas said “I’ve been making cheese for four years now, and I’m really chuffed to bits for Yorkshire Pecorino to be crowned the best semi-soft cheese in Britain. It all started when I went to visit my brother in Sardinia, and found out he was making cheese, and it actually tasted good! So when I came back to Yorkshire I told my wife we needed to make some that’s better. It took us six months to find the right milk, but from then on we’ve been winning awards every year. My brother quickly surrendered and after today, I don’t think he can say anything about cheese!’ Runner-Up: Wyfe of Bath

A washed rind cows’ milk cheese made by David Jowett and Antony Curnow at King Stone Dairy in Oxfordshire, which was launched in August 2015. Runner-Up: Sharpham Brie

In March 2015 Antony Curnow and David Jowett formed King Stone Dairy and began to make trial batches of cheese. The award-winning Rollright Cheese, started to be sold in August 2015 and has already earned notable acclaim.

Over 7,500 people voted for their favourite cheeses, producers and retailers in the first Great British Cheese Awards which were introduced to give the general public a large influence on recognising and rewarding outstanding British cheese. Only those cheese producers and retailers who received the most votes in each category were shortlisted for an award. A prestigious panel including Brian Turner – Chef Restaurateur and President of the Royal Academy of Culinary Arts, Chantelle Nicholson – Group Operations Director for Marcus Wareing Restaurants & Head Chef at Tredwells by Marcus Wareing, Galton Blackiston – Owner & Chef Patron of Morston Hall, Adam Woodyatt – Actor & Food Blogger, Patrick McGuigan – Food Journalist and Cheese Writer, Andy Clarke – TV Food Producer, Felicity Spector – Food Writer & Great Taste Awards Judge, Chris Mercer – Editor of Decanter.com and Paul Thomas – Dairy Technologist have together tasted and judged the overall category winners.