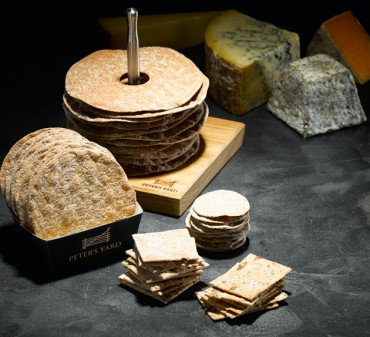 Out of 10,000 entries into this year’s Great Taste awards, Peter’s Yard’s Original Artisan Crispbread has been awarded three stars and also named as one of Britain’s Top 50 Foods.

Great Taste is widely acknowledged as the most respected food accreditation scheme for artisan and speciality food producers with products being blind-tasted by over 400 of the most demanding palates belonging to food critics, chefs, food writers and journalists. This year the esteemed panel included Masterchef judge and restaurant critic Charles Campion, TV presenter and cook, Aggie Mackenzie, Great British Bake Off winner, Frances Quinn, Masterchef the Professionals finalist, Adam Handling as well as leading Chefs and food buyers from Harrods, Selfridges, Waitrose and Marks & Spencer. Only the very best foods and drinks are recognised, with just 130 products awarded the top 3-star, which are then tasted again to finally agree on the Top 50 Foods.

Judges described Peter’s Yard’s Swedish-style crispbread as “deliciously malty” and “the best biscuit for cheese out there”. As a Top 50 Food, the artisan crispbread now joins the ranks of some of the most outstanding foods available and is in with a chance of winning a prestigious Great Taste Golden Fork, one of the highest accolades in the world of fine food, which will be announced on Monday 7 September, at an Awards’ Dinner at the Royal Garden Hotel, London.

Wendy Wilson-Bett, Co-Founder of Peter’s Yard said “We are absolutely delighted to have won a 3 star award, and to be recognised as a Top 50 food is incredible. The Great Taste Awards reflect quality within the speciality food industry and provides an independent assessment and true benchmark of the very best foods and drinks. As everything is blind-tasted all entries are on a level playing field so to be amongst the Top 50 from 10,000 entries is absolutely fantastic. This is a phenomenal achievement for the whole team and we are really excited to await the results of the Golden Fork awards in September.”