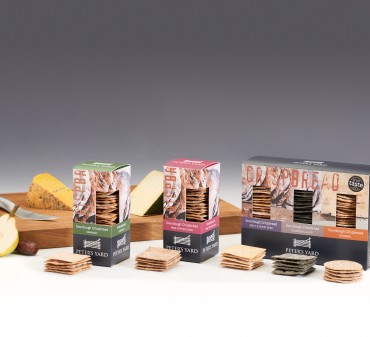 The new varieties will provide consumers with a greater choice of innovative, high-quality savoury crackers. Each new flavour has been carefully paired with a recommended partner, be it cheese or pâté.

Caraway is recommended with a strong, hard cheese. The caraway seeds bring a warm, sweet and delicate aroma to the crispbread.  Pink Peppercorn adds a slight rosy hue and light peppery touch and perfectly partners a wide selection of cheese and works well alongside a rich pâté. Each 90g pack will retail at £2.50.

The new Selection Box has been carefully designed as a one-pack savoury biscuit solution for cheese.  To reflect the diverse offering of a cheeseboard and to provide interest and differentiation, the packs brings together a choice of crispbread with differing colours, shapes and flavours that include Charcoal, Spelt & Poppy Seed alongside the classic Original.  Charcoal is recommended alongside a Brie or soft goats’ milk cheese; Spelt & Poppy Seed should be paired with a Singe Gloucester, Camembert, Wensleydale or Caerphilly whilst the neutral base of the Original crispbread is a perfect match to any cheese. The selection box, which is expected to be a popular Christmas gift, will retail at £6.00 for the 265g box.

Co-founder of Peter’s Yard, Wendy Wilson-Bett said: “Like all of the Peter’s Yard range, the new varieties follow an authentic Swedish-inspired recipe that uses all-natural ingredients and a precious, naturally fermenting sourdough starter which develops over 16 hours. Each batch of dough is rolled in rye flour, cut to shape and hand-baked until golden, taking care to preserve the characteristic bubbles and curves that come from using a natural sourdough starter. The result is a light, crisp texture that makes them the perfect host for cheese and the natural choice for many Michelin starred chefs.”

“We are delighted to extend our range using the same high standards and philosophy and bring retailers new flavours that perfectly complement the existing core range.”

Earlier this year Peter’s Yard announced that they were co-organiser of the new Great British Cheese Awards. The awards will celebrate the best of British cheese produced and distributed by independent cheese makers and retailers and will stand apart from similar events as the general public will have a large influence on recognising and rewarding outstanding British cheese. Winners will be announced in October.