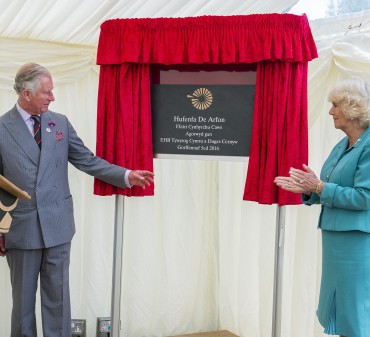 Alan Wyn Jones, Managing Director at South Caernarfon Creameries said “We are very honoured that The Prince of Wales and The Duchess of Cornwall officially opened our new cheese facility, which is the first major cheese production investment in the UK for 40 years. We welcomed the opportunity to show Their Royal Highnesses our new facilities and to provide an insight into our co-operative business, how our member farmers supply high quality Welsh milk which is processed into quality, award-winning Welsh cheese and Welsh butter which we sell to UK retailers and to international markets.”

The Prince of Wales has a longstanding commitment to supporting Britain’s agriculture and ensuring its sustainable future. In 2010, HRH founded The Prince’s Countryside Fund, which aims to create a brighter future for the British countryside.

The new Cheese Production Unit will enable South Caernarfon Creameries to increase capacity from 9,500 tonnes to 12,000 tonnes of cheese per annum.

South Caernarfon Creameries is a food PR client of Splat PR. For the official opening, Splat PR was the PR contact for all press, including HRH The Prince of Wales’ press office. We provided support pre and post of the event to a wide selection of media. Photographs courtesy of Nigel Hughes Photography.