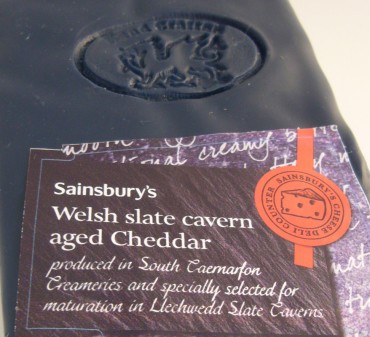 A new Cheddar has been developed by Splat Food client South Caernarfon Creameries in partnership with Llechwedd Slates Caverns.  The Creamery has adopted a very traditional  maturing method with the cheese being transported from their Chwilog base to the Slate Cavern in Blaenau Ffestiniog and left to mature 500 feet underground

This maturation process, believed to be in the steepest mining maturation caverns, adds unique characteristics to the cheese; a firmer body and depth of flavour with rich savoury notes and you really can taste the difference. Once matured, the 14 month old cheese returns to the Creamery before being cut into 1.25kg blocks, hand-dipped in a blue slate coloured wax and finished with a hand-crafted Dragon stamp.

This new cheese has initially been developed exclusively with Sainsburys and is available on their deli counters with a 200g retail pack launching in their Taste the Difference range in early Autumn 2014.  The Creamery also plans to launch the Welsh Slate Aged Cavern Cheddar under their own Dragon brand with an anticipated launch and tasting at the Royal Welsh Show in July.

“This is a truly unique cheddar that really demonstrates our Welsh heritage and we are so grateful that Llechwedd Slate Caverns agreed to work with us to mature our cheese at the mine” explains Alan Wyn-Jones, Managing Director at South Caernarfon Creameries. “It is an amazing  maturation technique, we are very pleased with the fabulous eating quality and confident that our cheese will enjoy phenomenal success. These are exciting times at South Caernarfon Creameries. We have ambitious growth plans and working on a host of new products to be launched later in the year. These growth plans mean that we are actively seeking member farmer suppliers who want to join our co-operative.”

The cheese has been phenomenally well received and Splat Marketing & PR has securred a mix of local, trade and consumer press as well as radio & TV coverage.