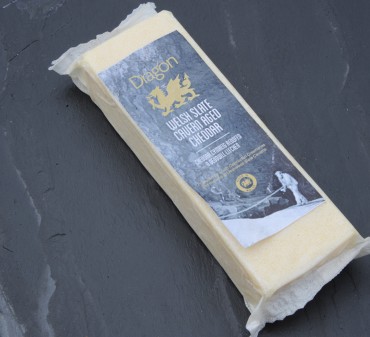 There’s no better time to celebrate all things Welsh than St David’s Day. This year there’s the chance to indulge in a new and authentic Welsh cheese as South Caernarfon Creameries officially launches their Welsh Slate Aged Cavern Cheddar into local Welsh stores.

The new Cheddar, packed in the Creameries’ Dragon cheese brand, has been developed in partnership with Llechwedd Slates Caverns. The cheese adopts a very traditional maturing method transported from the creameries’ Chwilog base to the Slate Cavern in Blaenau Ffestiniog and left to mature 500 feet underground. This maturation process, believed to be in the steepest mining maturation caverns, adds unique characteristics to the cheese; a firmer body and depth of flavour with rich savoury notes.

To celebrate the launch of this authentic Welsh cheese and to coincide with St David’s Day, a cheese tasting weekend has been arranged at Llechwedd Slate Caverns on 28th February and 1st March.

The cheese is presented in a 200g pack under South Caernarfon Creameries’ own Dragon brand and is available to buy at local Welsh retailers.

Alan Wyn-Jones, Managing Director at South Caernarfon Creameries said “We have deliberately launched our Dragon Welsh Slate Aged Cavern Cheddar to coincide with St David’s Day. The process used in that the cheese is made from Welsh milk produced by our member farmers and left to mature deep in the mine at Blaenau Ffestiniog really highlights our Welsh heritage. St David’s Day seemed the perfect time to launch into Welsh stores and we hope that local people enjoy the Slate Aged Cavern Cheddar as it really has a distinct, mature flavour and a fabulous eating quality.”